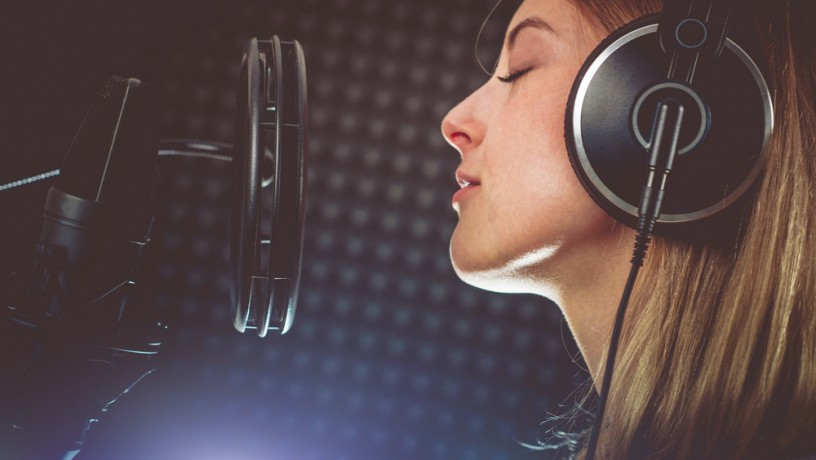 It’s hard get a handle on all the various mythical, magical, and downright wacky fictional landscapes veteran voiceover casting director Dawn Hershey-Lopes has helped voice actors to inhabit over the years. Coming from humble roots starting out as a receptionist at Nickelodeon Animation right out of college at San Diego State University, she worked her way up to casting supervisor while working on shows like “Hey Arnold” and others before heading over to web series pioneer Icebox. Later she helped to launch Blindlight, a studio specializing in video game voiceover. While there, Hershey-Lopes oversaw casting for games like “Halo 2,” “Elder Scrolls IV: Oblivion,” the “Transformers” game, and the “Iron Man” game.

Although she left Blindlight in 2008 to start a family, Hershey-Lopes continues to have a tremendous impact on the field as a freelancer, working remotely from her home on an acre of land in northern California with “the husband, two kids, two dogs, two cats and two goldfish.” She manages all that while casting shows and films like the Teenage Mutant Ninja Turtles movie “TMNT,” “Tom and Jerry,” “Harvey Birdman, Attorney at Law” and “Scooby Doo, Guess Who.”

Hershey-Lopes took time out from her various casting and parenting projects to offer some thoughts on the voiceover field and advice for actors looking to break in.

On breaking in to the business – and overcoming early setbacks:

One of my best friends [from SDSU], Chrisie, got a job at Warner Brothers Animation. When I graduated, she got me a [temp job] foot in the door as assistant to the assistant for the president of WB Animation – and then after three days I was fired, because I knew nothing. This was like 1993, I had never used email, I had never had internet. They asked if I take dictation, and I was like, no. I could barely answer the phones. They hated me. So I got a receptionist job at Nickelodeon Animation, and I worked there for 9 months, until a casting assistant position opened up, and I [became] the assistant to Joey Paul who was on the show “Hey Arnold.” I worked on that show for five seasons, then I became the casting coordinator, and then casting supervisor before I left to go to Icebox.

The importance of developing relationships in the business:

When the dotcom crash hit, I went on to form my own company with three of the guys from Icebox called Blindlight, and I was head of casting. And all we did was video games. I would cast like “Halo 2” and all these big names. So at the same time I was working for Blindlight I was also freelancing for any other things that came along, and that’s how I got all the Adult Swim shows, and “TMNT” and all these other shows. I just started developing these relationships working with all these people and working for free a lot, and then they came back around with a real paying project, and they’re like “You wanna work for real?”

I left Blindlight in 2008 and took time off and started my family, and I’ve been freelancing since, as a true freelancer from Northern California. I do everything online now from home. I exclusively do animation. I left video games in 2008, so I really just do voiceover [for animation]. I’m working on season 2 of “Scooby Doo Guess Who,” which is going to be a streaming show on Boomerang, and then I’m on season 5 of Tom and Jerry, and season 3 of an online show called “Clash-A-Rama,” which is based on the “Clash of the Clans” video games.

I just finished working on a Harvey Birdman special, called “Harvey Birdman: Attorney General.” That’s going to air on Adult Swim in October sometime. I cannot believe we got [Stephen Colbert] but he did it. He ran down from taping his show, went into this little crappy closet booth, but we knocked it out and we did it in one take. It was amazing. We were all phone-patched in from our little corners of the world. We patched him in from New York, so it was great. Everybody did it [from] the original cast.

What she’s looking for in an actor:

On the biggest advantage VO work has for actors over live-action:

It doesn’t matter what you look like! Whereas in film auditioning I think that’s probably like 90 percent of the casting: what you look like, and how tall you are against the other people in the film, and what you project as an actor, as a physical character. So all I have to deal with is the voice, and it’s so much easier. You can just really rely on the acting. You don’t have to take a hit in the acting because the person looks exactly like a young John F. Kennedy.

Best advice for actors looking to break in to VO:

I would say you should do several workshops. It’s just going to depend on your budget, how much you’re willing to spend on taking workshops. But to get into the business, if you can take three or four solid workshops before you make a demo reel, that would be what I would suggest. It does cost money. Unless you’re super tech savvy and can produce it yourself, you’re going to have to spend some money on workshops and a demo reel, because that demo reel is what you’re going to send to an agent to get represented. And you’re going to probably need to take workshops on different areas of voiceover: there’s movie trailers, promos, commercials, books on tape, animation, video games, jingles – so you’ve got to think of all these aspects of voiceover and which ones you feel strongest in.

But do your research first:

I always point people to this thing called the Voiceover Resource Guide, and they have it online now. They have one for New York and one for LA. It’s really a wealth of information. They have everything from every recording studio, with all the contact information, every voiceover casting director, AFTRA/SAG rates for jobs, workshops, trainings, and who teaches them, and people list their prices. And start contacting them, because some of them are like a huge waiting list. Like Bob Bergen’s [who  voices Porky Pig and Tweety Bird] animation workshop, you’ve got to wait like six months to get in. They’re usually taught by voiceover actors who do the work themselves and then they teach, [but] there are a few voiceover casting directors who teach, and a few production studios that teach.

And know animation if that’s where you’re aiming to work:

It helps the more you know about animation history. There are certain people who work for the DC comic book franchises, who are obsessed with the comic book world, who know everything there is to know about all those characters. And then you’ll have people obsessed with the Adult Swim lineup. When they know a lot about the show they are auditioning to work for, it usually helps when they come in to meet producers. I would say educate yourself – but those people just naturally educate themselves because they’re obsessed with a certain genre.

On the importance of getting your audition in early:

If you have an agent, you can go to your agency and they’re going to have a studio to record auditions. They’re just going to line people up out the door and record them one after the other. You can also book a studio for like $10 to record an audition. But I would say at least 50 percent of voiceover actors have their own studios that they’ve built. They have their microphone in there and their music stand and the walls are all soundproofed, and they get the copy from the agents for the ten shows they’re auditioning for that day, and they go in their little closet at home and read them and then the agent sends them out. It’s just so fast-paced now, if you’re not getting your audition in right when the agent sends it to you, like that night or the day after, then you’re going to lose out, because there’s 100 other people that have already gotten theirs in.

The Top Five Mistakes Beginning Actors Make–and How to Solve Them!

A LITTLE PRINCESS THE MUSICAL – Sara has gathered her friends, hoping to contact the spirit of Becky’s mother. Dramatic Monologue For Female Kid Actors. 1 ...
Film Scenes for Men

“But do you have the common courtesy to call me and tell me that you will be twenty-five minutes late?” from the TV Show “Full House”. Uncle Jesse ...
2 Person Scenes

“I was sort of wondering what you looked like.” from the film “The Apartment.” Bud gets caught lending out his apartment so the execs at his office ...
2 Person Scenes

“Hey I’m sorry I didn’t show up.” from the film “Mystic Pizza.” Kat is late and Daisy is pissed. The sisters argue. Ideal for Adult Females ...