Monologues and Scripts for Actors

Here are our monologue scripts. We add new monologues every day for all types of actors and acting situations. Dramatic to Comedic, Theatre to Film, Adults to Kids. Free for use. 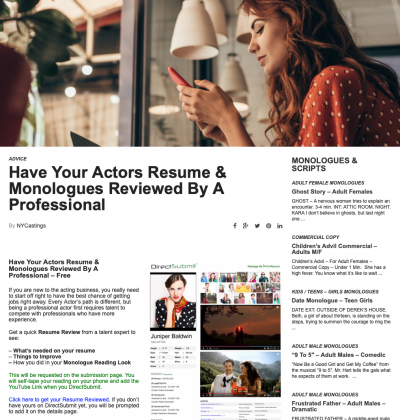 Get You Resume, Reels and Monologues Reviewed

Need some advice on Monologues? Hear are some starter articles to get your questions answered:

Self-Taped Monologues – Using Downtime To Get More Screentime!
Since many of us have a lot more time free time right now, due to our social distancing practices, it can give actors some time to ‘up their resume’ game with some new video. You can easily do this by setting up your smart phones or computers and recording some monologues or scenes with your camera. The recording is the easy part, the more important part would be choosing great material for yourself and getting it up to a level 10 in terms of power and dynamics. If how to do this is a mystery to you, refer to an article I wrote called: 1 GREAT TIP To Become A Better Actor – it covers the ‘practice makes perfect’ aspect of recording your scenes. I have also included some links with additional monologue articles and links to find them below…

How To Find The Best Acting Monologues For You
Performing Acting Monologues can be nerve ­wracking. For a time span of 1-­3 minutes it’s all eyes on you. You need to create the character, the scene, and the circumstance all without the help of another actor. And, oftentimes, if you’re performing a monologue, it’s for one of these few reasons: You’re auditioning for something, you’re in the office of a manager or an agent that you’re hoping will represent you, or you’re performing on stage for a monologue slam. All of which are to serve one purpose: Show the world just how talented of an actor you are. Show the world your acting “range.” Intimidating, right? And all the more reason why you need to make sure that the monologue you work on is the right fit for you…

Fall In Love With Monologues
Drilling through a monologue can often feel as nerve-racking as a trip to the dentist’s office. It can make your jaw bolt shut and mind race to do something, anything else! Yet there is another approach. A way to look at monologues that can make you actually “fall in love,” according to Karen Kohlhaas, monologue maverick and acting coach.

Karen Kohlhaasis the director/producer of The Monologue Audition Video (DVD), and author of The Monologue Audition: A Practical Guide for Actors (Foreword by David Mamet), How to Choose a Monologue for Any Audition, and The Monologue Audition Teacher’s Manual. Karen is also a founding member of New York’s Atlantic Theater Company, where she recently directed the Lucille Lortel Award nominated THE COLLECTION and A KIND OF ALASKA by Harold Pinter which was named a top-10 theater production of 2010 by the New York Times, New York magazine, and the New York Daily News. So if you are looking to breathe in the sweet air of monologues that do not scare, go ahead and take in these tips from Karen Kohlhaas… Q&A with Karen Kohlhaas…

Back To School – Mastering Monologues And Acting Sides With Janet Wilcox
School is never out… whether it be for summer, fall or winter… for actors who must always be prepared to spring into auditions! Learning, “How to Audition Success fully for Both Traditional and New Media” takes constant re-assessment. Luckily, actors have a new tool to help them prep… a book called “Mastering Monologues and Acting sides,” by voiceover industry veteran Janet Wilcox. The book is everything an actor needs to land a great part in today’s rapidly changing performing arts industry. Janet Wilcox wrote the book primarily because she “was inspired by voice actors and the fact that so much of what they do is a monologue.” And because she “went to the bookstore and saw that acting books haven’t changed much.”