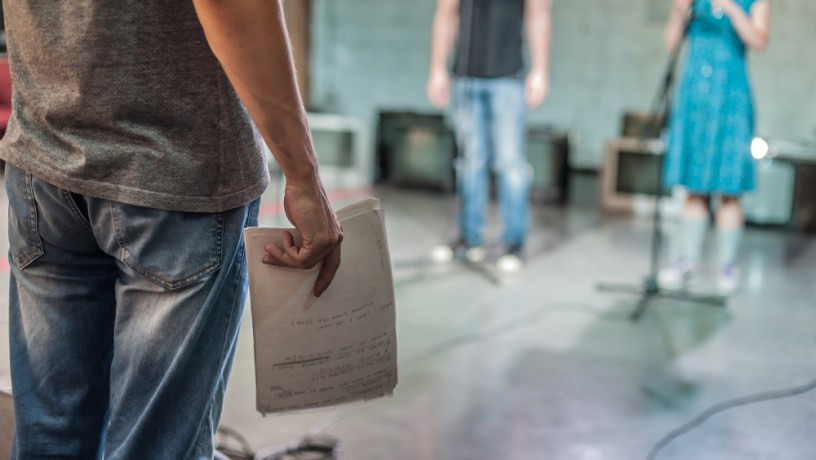 When starting out as an actor, you read and hear lots of terminology that you may not know about. here is a list of acting terms that you hear often on set and on casting breakdowns.

Aside – A part of dialogue that is directed directly to the audience or away from your scene partner as an internal thought. Very common in Restoration comedies and Shakespeare.

Blocking – The movement of the performance. Where you walk, sit, cross the stage, enter, exit, etc. A director will usually ‘block’ a scene early in the rehearsal process. Blocking can range from being very general (enter here, exit there) or very specific (pick the pen up on this line, sit on the sofa at this line, etc.)

Booking – The job. You will be ‘booked’ for a job; this means you are hired. Usually refers to on-camera work.

Booth – The area in the theatre with the light and sound boards. Usually in the back of the theatre facing the stage.

Call Time – For on-camera and theater. This is the time that you are called to be either at the theatre or on the set.

Cheat/Cheat in/Cheat out – To ‘cheat’ is to turn your face or entire body either out to the audience (or camera) to be seen better without completely turning (so it still looks natural, but you are not completely in profile) or to face in to conceal something.

Cold Reading – For on-camera and theatre. Acting done with the script in your hand, unmemorized or partially memorized. Usually you will have less than one day to prepare.

Comps – Complimentary tickets. Actors are usually given a number of comps to offer to their friends and family for the performances. Every theatre has its own policies regarding comps.

Copy – Usually refers to the script for commercial auditions. Sometimes only one or two lines.

Costume Fitting – Just like it sounds. You will be fitted for your costume by the costume designer or assistant. Usually you will be measured early in the rehearsal process and fitted with your costume later. This can be an especially long process for period costumes.

Costume Parade – At some point in the rehearsal process the actors will all ‘model’ their costumes or costume for the director. He/She will then either approve or discuss changes with the costume designer.

Cue to Cue – A rehearsal that only works transitions or light and sound cues. The internal portions of scenes are skipped over.

Dress Rehearsal – Rehearsal with all technical aspects and costumes and makeup.

Dry Tech – A rehearsal, usually without actors, when the director, stage manager and designers work out all the light and sound cues.

Greenroom – The actors’ lounge. Either in a theatre or production studio.

Half Hour – Actors will usually be given a ‘half hour’ call by the stage manager, meaning there is a half hour before the show will begin.

House – The area of the theatre where the audience sits.

House Left – The side of the stage that is on your left if you are in the audience facing the stage.

House Manager – The person who controls the house during the run of the show. Decides when to let the audience in, is in charge of the ushers, and tells the stage manager when they can begin the show.

House Open – Actors will be told when the ‘house is open,’ meaning the audience is being let into the theatre. Usually this is the actor’s cue to get backstage.

House Right – The side of the stage that is on your right if you are in the audience facing the stage.

Light Board – Either manual or computer operated. Operates the stage lights.

Light Cues – A change in the stage lighting.

Load-in – The process of bringing the set into the theater, or building set pieces.

Monitor – Usually for theatre only. This is the person in charge of checking actors in, giving them sides and deciding the order that actors will read. ALWAYS BE NICE TO THE MONITOR!

MOS – ‘Mit Out Sound’- without sound. For on-camera only. Moments on screen with no dialogue. Reaction shots, visuals, etc.

Must Join – You will be referred to as a “must join” if it has been 30 days since your first SAG booking. You MUST join the union for your next union job.

Off Book – Without the script in your hand. Usually you will have a deadline by which you need to be memorized or ‘off book’.

On Camera – Refers to anything on camera – tv, film, commercials, industrial film.

On Hold – A casting director will put you ‘on hold’ when you are wanted by the client for the job but not formally hired yet. You may not take other jobs that would conflict with the production dates during this time.

Papering the House – Sometimes the theatre will want to get the seats filled for a particular performance (usually if there is going to be a theatre critic in attendance that night) and will give away free tickets to anyone to fill the seats. Actors are often asked to spread the word to get people in the seats.

Photo Call – Some actors may need to appear in publicity photos for a show. This usually happens 2-3 weeks before opening and a photo call will be scheduled.

Pilot – A sample of a television show that the producers then try to sell to the networks. If the pilot is picked up by the network, it will be put on the schedule and will air for a trial period of usually 13 episodes.

Press Opening – Some theatres will have a special performance before opening night to which members of the press (critics) are invited. Usually, critics are invited for opening night.

Professional Comps – Most theatres will allow actors an unlimited number of comps for agents, directors or casting directors.

Projection – A director may tell you to ‘project’ more. This means to speak so that you can be heard throughout the theatre, this does not necessarily mean more volume or shouting. It’s a technique you will learn.

Props – Any non-costume, non-set items used in a production. A gun, a glass, deck of cards, etc.

Read Through – For theater and some on-camera. This is usually the first rehearsal when the actors sit and just read through the script with the director.

SAG-AFTRA – In 2012, the unions Screen Actors Guild (SAG) and the American Federation of TV and Radio Artists (AFTRA) merged to create SAG-AFTRA. This union protects on-camera and voiceover artists.

Sides – The portion of the script (for on-camera or theater) that will be used for an audition. Usually one or two short scenes.

Slate/Slating – For on-camera auditions only. You will be asked to state your name, and sometimes the agent that sent you to the audition, before you begin the scene. This goes on the tape for the casting director’s reference. This is called ‘slating’.

Sound Board – Either manual or computer operated. Operates the sound.

Speed Through – A rehearsal exclusively for lines. Actors recite their lines quickly without blocking. This is often to help the actors with memorization.

Stage Left – The side of the stage that is on your left if you are on the stage facing the audience.

Stage Manager – The person who will become your best friend. This is the person who runs the rehearsals, sets the rehearsal schedule and usually ‘calls’ the show (prompts the light and sound cues from the booth during performances). He/she is in charge of the production after opening night.

Stage Right – The side of the stage that is on your right if you are on the stage facing the audience.

Stage Whisper – Sounds like a whisper but is loud enough for the audience to hear.

Strike – After the final performance, the set is taken apart, lighting instruments are taken down and props and costumes are put away. This is called ‘strike’. Sometimes actors will be asked to volunteer to help. You are never obligated to help (unless you are a member of the theatre company), but it is a good idea to help if you can. Usually there’s good camaraderie, pizza and beer! This is not the case in larger union theatres where there are paid technical crews to take care of strike.

Taft-Hartley – Refers to a legislative ruling also known as the National Labor Relations Act. Allows non-union actors to work their first union job and any others within a 30-day period of the first booking without having to join the union. They may not work any union job after the 30-day period without joining the union.

Tech Rehearsal – Technical Rehearsal. This is when the director will work the set, lights and sound cues into the rehearsal process. This usually takes several days and is long and boring for the actors. Tech is very important and actors must stay focused and be patient during this process. The focus of the rehearsal is solely on the technical aspects of the show. It is for the technicians and the designers, and the ‘acting’ must take a back seat.

The Scottish Play – This refers to Shakespeare’s Macbeth. There is an old superstition that if you utter the name of that play in a theatre, bad things will happen. If you do say it, you may be asked to go outside, turn around three times and spit and then knock to be let back into the theatre. Some actors are very superstitious about this and will really make you do it! Be safe. If you must talk about that play, just say ‘the Scottish play’. Weird, but true.

Understudy – Actor hired to perform in a show if the actor originally cast in the role is sick or unable to perform that night. Often an understudy will never actually perform, but must be ready to go on with as little as 10 minutes notice. It is very common for an understudy to cover more than one role.

Upstage – The rear of the stage, away from the audience.

VOM – Abbreviation for “vomitorium” (from Greek theater). An exit/entrance to/from the stage through the house. 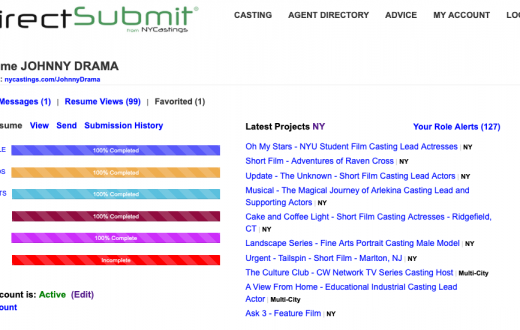 “Shot him in the neck, didn’t you?” from the film “Three Kings.” Archie tries to tell the members of his team what it’s like to get ...
Kids / Teens – Girls Monologues

CHARLOTTE’S WEB – Fern names the pig she rescued. Comedic Monologue for Kid Female. 1 Min. FERN: My very own pig! Now I have to name you. ...
Adult Female Monologues

“But if you love me, you have to love all the things about me,” from the film “Dirty Dancing”. Baby confronts her dad. 1-2 Min. ...
Kids / Teens - Boys Monologues

GODSPELL JR – John the Baptist preaches and sees Jesus before him. Dramatic Monologue for Kid Male. 1 Min. JOHN THE BAPTIST: You vipers’ brood! Who ...