Can you imagine a work of art with no creator? Of course not! Colors do not randomly leap on to canvas paper – just as actors do not randomly show up on film sets. Yet when it comes to the art of filmmaking, casting directors have long gone uncelebrated for their strokes of genius – for their role in assembling the colorful casts of our most beloved moving pictures.

Legends, such as Clint Eastwood, Glenn Close, and Robert Duvall, all got their big break because a casting director discovered and believed in them. 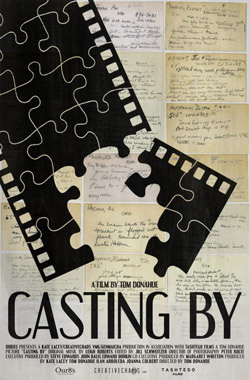 CASTING BY takes audiences on a fast-paced journey through the last half century of Hollywood history from an entirely new perspective. The film showcases pioneers like Marion Dougherty and Lynn Stalmaster whose exquisite taste and gut instincts helped to put the final nail in the coffin of the old studio system and usher in the New Hollywood.

“Casting directors are very important,” shares filmmaker Tom Donahue. “The one thing that surprised me incredibly was, ‘How has this story not been told yet?”

Well… the story will now be on display for the world!

And for NYCastings members, here is a special sneak peek from Tom Donahue on…

10 FACTS EVERY ACTOR SHOULD KNOW ABOUT CASTING DIRECTORS:

1. When you walk into an audition, the casting director is with you.

2. If they like you, they will keep bringing you in for other parts.

In CASTING BY, the people interviewed were shocked by the level of support they got.

Al Pacino shares that “Marion brought me in for everything.”

John Travolta talked about how much support Lynn Stalmaster gave him, how he never stopped bringing him in until he made him a star.

3. Casting Directors succeed when you succeed.

In a sense, there is a certain pride that casting directors get. When Lynn Stalmaster finally cast Travolta in WELCOME BACK, KOTTER it was the fulfillment of a dream for him to see this young actor he saw promise in, fulfill his potential.

4. You cannot guess what the Casting Director thinks about you!

Marion Dougherty took a chance on Jon Voight, and he failed. Jon thought he would never work again. He wrote 6 letters to Marion trying to apologize and never had the guts to send them.

Jon might have disappointed her, but the genius of Marion is that even if someone failed an audition she could still tell they had potential.

5. It is up to YOU to build a relationship with the Casting Director – by doing a great job. 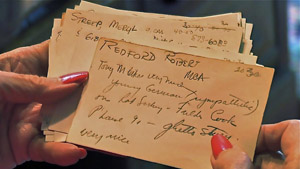 Jeff Bridges says, “I go into the audition and treat it like a performance.”

Have fun with it. Don’t just think about whether or not you are going to get the part. Don’t think it is the end all and be all. It is about continuing to build a relationship with the casting director.

6. There is a lot of risk involved in casting a film.

Casting the film is one of the most important parts of the film, and it is all about having really great instincts. The level of knowledge and passion that these people have for their craft is very important to filmmaking. No one thinks about it, and as a result casting directors are thought of as people pushers or list makers, and there is so much more to it than that. There is not a director alive who would know the entire talent pool around the world, and that is what a casting director provides. There is this creative art to reading a screen play, having all these characters in your head, and understanding who is right for that part.

7. Casting is not all about YOU!

Casting is an alchemy. It is character interpretation, but also how that character matches you as well as what it would do to the ensemble if you were that part.

Actors think they can play any part, that if they walked into the audition there isn’t any reason they shouldn’t get the part. You can’t know if you are right for every part because you don’t know who you are playing against. There is an alchemy that happens between the actor and all the other actors in the film. Part of being a casting director is the art of putting together an ensemble.

It is mostly instinct and intuition. A lot of times a film doesn’t work because it is not cast correctly. There are so many aspects of a film that if done wrong can derail a film. Margery Simkin’s did the casting for AVATAR, and she also did the casting for BEVERLY HILLS COP. At first, she cast Sly Stallone and then he dropped out and Eddie Murphy got the role. It went from an action movie to a comedy and they had to convince the studio that all the people that were cast with Sly didn’t work with Murphy. They had to cast all the other parts around Murphy. A great majority were replaced.

Actors have to see that it is not about you, it is about the company of the people who make the movie. Each of those actors in that Sly movie were right for the part. And then, as soon as Sly left they were no longer right. So it was not just about them

Beyond the artistic side, there is also the organizational side to casting. The casting director has to figure out not only “Is the actor right for the part?” but “Are they available for the time we are shooting?”

You can have your ideal cast, but what if none of them are actually available to shoot? So, there is always compromise. That is part of the art and the balance.

What happens is that the leads are cast first. And a lot of times they are attached by the producers, before casting directors even get involved. So they are casting top down around those central characters.

9. Casting Directors may seem guarded for a reason.

Never touch a casting director. This became such a prevalent thing in the interviews of CASTING BY – times when there was physical violence or inappropriate touching. That is not the way to be remembered.

There are true crazy people out there. Once you invade the casting director’s physical space, they are not going to remember whether you are right for the part.

That is why it is important for actors to do something that makes them remember you. Be memorable. Don’t just come in and do your reading and leave. Be loquacious.

With Travolta, he said that he came to LA and didn’t know anyone. But he had a meeting with Lynn Stalmaster and when he walked in to the room Lynn immediately got a sense of him. They had a short discussion, and after a while Lynn was casting a lead in THE LAST DETAIL and John Travolta popped into his head. Lynn didn’t recall John because he had a great reading. There was a certain essence that he communicated to Lynn. All great actors have an essence that the casting directors pick up in their brain. There is a data bank in their brain of that essence, and that becomes the short list of who is right for that character.

Lynn has this genius memory. He not only remembered the actor, he recalled the day and time he called the actor back.

You are in their head, you are always in consideration. Janet Hirshenson and Jane Jenkins tried Meg Ryan for PRINCESS BRIDE, and it didn’t work. They tried her for other films, and it didn’t work. They had yet to find the material that was right for her. And then, finally, they got WHEN HARRY MET SALLY. They knew she was perfect for it. It probably took three or four years.

Julia Roberts came in to read for MYSTIC PIZZA, for the part of a working class brunette. On the way to the audition her car broke down and she was an hour late, so she already had a strike against her. And then she was blonde and elegant, totally wrong for the character. Julia starts to read the script, seemingly not right for the part, and Janet and Jane said “I like you. I want you to dye your hair brown and wear something trashy.” They gave her the entire script, which was not something they normally do, and they had her come back. She got the part that made her a star

— WOW —- That is a lot to learn about the art of casting. Thanks to Tom Donahue for these 10 tips and for the eye opening documentary. ABOUT TOM DONAHUE – DIRECTOR, CASTING BY

Tom Donahue was born in Rhinebeck, NY and is the co-founder of CreativeChaos vmg. Donahue made his directorial debut in 2005 with the narrative short Thanksgiving, starring James Urbaniak and Seymour Cassel & written by Sean Gullette. He made his feature directing debut with the documentary Guest of Cindy Sherman (5 stars – Time Out NY), which premiered at the 2008 Tribeca Film Festival to rave reviews. Donahue has also produced and edited numerous features and documentaries, which have won over twenty-five awards combined at such prestigious festivals as Sundance, Cannes, Berlin, Toronto, SxSW, Venice, San Sebastian and Tribeca. 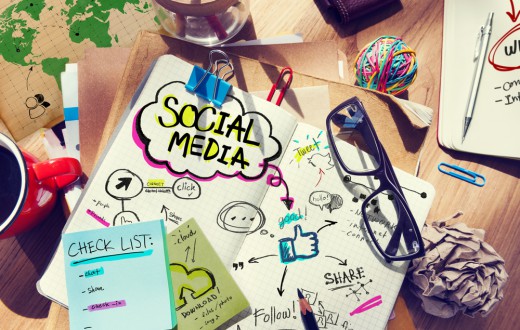 “There you go, like all the rest of them!” from the play, “Overruled” Mrs. Lunn is confiding in Mr. Juno about how she has been constantly ...
Film Scenes for Women

“Come in, Mr. Juarez.” from the film “Being John Malcovich.” Craig gets a very strange interview from Lester. Ideal for Adult Males ranging from 30-60. 1-2 ...
2 Person Scenes

“I was sort of wondering what you looked like.” from the film “The Apartment.” Bud gets caught lending out his apartment so the execs at his office ...