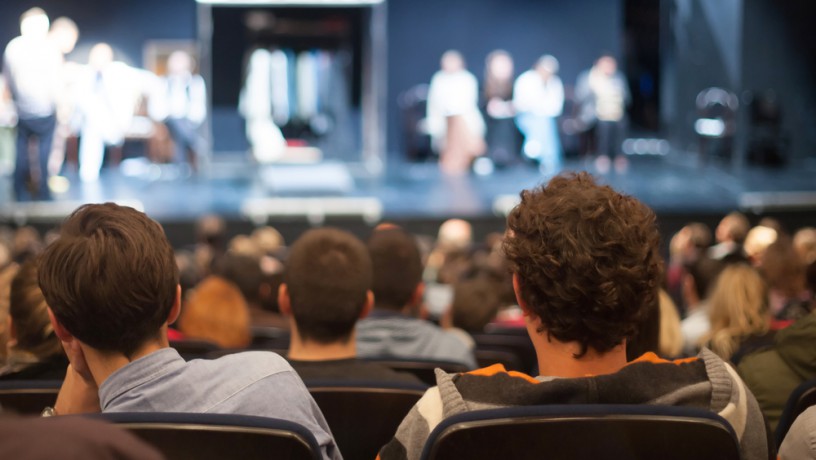 As actors we are lucky in so many ways. We get to play for a living, we get be creative, and we get to hang out with fun, vivacious people. And of course, we get to revel in the adrenaline rush of performing, something mere mortals either don’t enjoy or rarely have the opportunity to participate in.

One other way we’re lucky is that the history of our chosen field is written down. It’s easy to forget in this digital age that live performances of plays and musicals make up the vast majority of the history of our craft. Of the 2600 or so years through which we can trace the history of acting, filmed performances have only been around about 120 years, since the 1890s. For those of you counting at home, that’s almost 2500 years in which every single acting performance that was ever done was live in front of an audience.

So just based on history alone, we as actors can surely benefit from studying live performance; after all, that’s where it all came from. And here are a few other ways we can learn from watching live shows–and why every actor should try to see plays as often as possible.

Every film actor, even if they’ve never performed in a play, benefits from techniques that have been developed in the theater over thousands of years. And truth be told, the vast majority of our best film actors came from a theater background. When you see a live play you get to experience a small piece of this immense history first-hand and connect with how this has been done for millennia.

What’s more, when you see plays, especially ones that are a bit older, you have a great opportunity to read the material beforehand. Obviously, when a film or television show first comes out, it’s likely to be impossible to get your hands on a script if you don’t know somebody who knows somebody. But by reading a play before you see it, you can add tremendous depth to your understanding of what’s happening in the story. Play scripts are often readily available to read online, or you can order cheap used copies via Amazon or new ones via Samuel French, or check them out at the library.

This is where the pleasure of seeing a play melds with the homework aspect of it. As actors, we’re usually people who thoroughly get lost in and enjoy film and theater. But at the same time, we often can’t help but offer a critical eye, in the best sense of the word. We can’t help but view shows and movies on a different level. And being familiar with a piece on the page before seeing it performed gives you a great opportunity to go even deeper and really delve into characters and their objectives. You can analyze scenes and think about what tactics you might use if you were to perform in the roles therein. And then when you do go out to see the play, you can compare and contrast how the actors approach the same scenes. You might be surprised–at both the similarities and the differences between the actors’ choices and your own!

When we see a film, unless there is a director’s cut or some other alternate version, we are seeing a single, finished product. It is the interpretation of a writer’s words as viewed by a director, cinematographer, actors and other creative minds that worked on it. And when you think about it, as great as some films are, it’s almost a shame to have them immortalized thusly. That’s where plays come in: there are almost unlimited ways directors and actors can interpret the written words of playwrights–and they do. If you’ve ever been to see a Shakespeare play, you may have seen “Macbeth” as a Chicago mobster, or “Hamlet” as a stockbroker–or “Julius Caesar” as a modern reality show star turned “politician.” I saw a production of “Taming of the Shrew” that made Petruchio’s family a bunch of slack-jawed Texas yokels–complete with banjo and overalls. Kate’s family naturally was from New Jersey and they all spoke with exaggerated Sopranos Joisey dialects–right down the “fuggedaboutits.” Fairly certain those weren’t in the First Folio… At any rate, you get the idea. By seeing where the imaginative minds of artistic directors, directors and actors take their interpretations of plays, we as actors can activate our own imaginations. Seeing different takes on theatrical productions can inform and expand your own palette and inspire new creative choices in your own performances. And this isn’t strictly limited to The Bard. You could see five different productions of “Who’s Afraid of Virginia Woolf,” with actors saying the same words and performing the same scenes, but you will take away something different from each one.

Which brings us to another wonderful aspect of live theater: not only is every production of every play different from every other one, every single performance is a different beast from the one that went up the night before. When we see a live show, we are watching actors who of necessity must think on their feet and be engaged, actively listening, and reactive to what their scene partners do. This offers tremendous lessons for actors who are concentrating more on film and television work in how to really stay focused and in the moment–nobody is going to yell “Cut” if something goes awry. If someone flubs a line, jumps a page ahead, trips and falls, or forgets a prop, so be it. Barring a heart attack or a fire in the lobby, the show must go on. The actors on stage just have to go with whatever happens and work with what they’ve got. Live, scripted theater is one of the best places to witness improv work, much of which flies over the heads of the uninitiated.

In the work we do on-camera, of course we must connect with our scene partners in order to give a valid, genuine performance. However, there is something vital and raw that you get from watching and performing in stage productions that isn’t always present on camera. The fact of one’s always being on the stage with the other actors, engaged and face to face, and the fact of the audience there sharing the story from only a few feet away creates a visceral experience that is generally unmatchable on screen. There is a rare and beautiful moment in theater sometimes in which everyone in the house and on the stage come together as one for a moment and share something–and then it’s gone. This is what the Greeks passed down to us from 2600 years ago.

Okay, you’ve got your homework assignment–now go see a show!

“But do you have the common courtesy to call me and tell me that you will be twenty-five minutes late?” from the TV Show “Full House”. Uncle Jesse ...
Audition Monologues

“Augustus Waters was a cocky son of a bitch. from the movie “The Fault in Our Stars.” Isaac gives the still alive Gus his eulogy. Ideal ...
Film Scenes for Men

“What? Why would they laugh at you?” from the movie “School of Rock.” Dewey consoles Lori after she’s made fun of. Ideal for Adult Males in ...