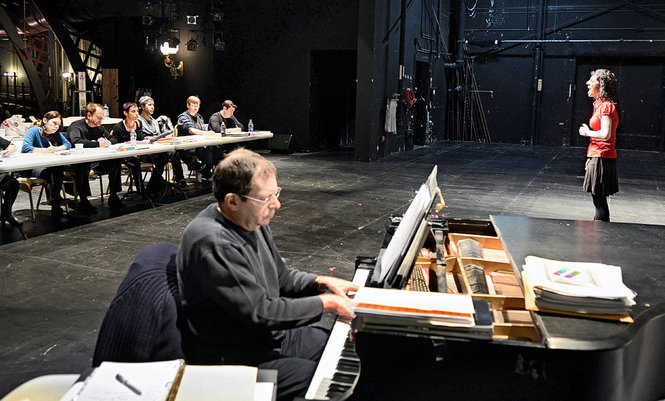 Endless digital ink has been spilled about auditioning and the travails of the working actor as he or she pursues a career in this tough, demanding business. You quickly learn you need to develop a thick skin in order to survive with your mind and self-confidence intact. It is perhaps appropriate then, in a business as competitive as this one, that in order to secure work we must put ourselves through the toughest of “job interviews:” the audition.

And most actors would probably agree, the musical theater audition is the most difficult job interview of all. There are just so many things that can go wrong, even more so than in a monologue audition. It’s such a high-wire act of metaphorically spinning plates that it’s almost a minor miracle when a musical audition goes perfectly.

However there are a few common mistakes people make going in to audition for musicals. We can’t promise you a perfect audition every time, but if you avoid these five errors you will be giving yourself a leg up on the competition.

It is amazing that in this day and age of instant everything being available online, people still go to musical auditions clutching worn-out, scribbled-on sheet music that is not even in their key. One veteran musical theater accompanist tells the story of a girl who came to her audition and didn’t even know what key she wanted her song in–she asked him to play it four steps up from where it was written, “…or maybe it’s four steps down,” she mused. Needless to say, it didn’t go well. Know your key, have the music in that key, and provide the accompanist with a clean copy clearly marked with highlighter where you want to begin and end your piece. Not only will you make their lives easier, it will help you to have a smooth audition without awkward pauses and avoidable errors.

2. The audition isn’t just about your voice

While singing is obviously an important component of a musical theater audition, it is a grave mistake to think that your voice is the only thing on display. As with any audition, YOU are auditioning, not just your disembodied voice. This means you need to show your personality, your presence, and use your entire instrument to convey the spirit of the song. As in all acting, you must use your mind, heart and soul to fully engage with the piece and to communicate it effectively. Otherwise middling singers can and do find musical theater work consistently because they have mastered the ability to connect to the lyrics they are singing and deliver the goods to the audience. And remember, warming up not only your voice but your entire body not only helps you to better inhabit the piece you are performing, it also relieves pre-audition tension and helps free your breathing.

This is one of those tips that seems so obvious on the face of it that it hardly seems worth mentioning–were it not for all the people who still do this. Choose a song that is somewhere in at least the general neighborhood of the show you’re auditioning for. If you are singing something from “The King and I” (and please don’t) at an audition for “Hedwig and the Angry Inch,” you are going to get some weird looks. More importantly than questions of personal taste is the fact that the casting team can’t get a solid handle on what you might bring to the show if you don’t sing something close to the style of that show. Having said that, keep in mind too that unless they specifically ask for it, most people involved in casting a musical probably would prefer you not sing a song from the show you are auditioning for. They are already quite familiar with those songs, and they are only going to become more so over the next weeks and months. Don’t burn them out on the music before the show’s even begun rehearsing.

4. You aren’t alone up there

Another mistake a lot of auditioners make is taking the accompanist for granted. That’s not to say you need to gush over them or buy them flowers or anything. It’s just that you need to realize that the collaborative nature of musical theater requires us to work closely and seamlessly with a whole team, even more so than in a straight play. Your ability to communicate with and get on the same page as your accompanist is vital not only to your ability to sing your song the way you want, but also to demonstrating your ability to work with others musically. Don’t rush, take the time to show the accompanist exactly where you want to start and stop (although this should already be highlighted on your sheet music!) quietly give them a tempo when you’re ready to begin–and thank them after you sing!

Your audition is likely to be your first contact with the creative team producing the show. But for them the process has already been underway for a long time. They have already put a ton of thought into how they are going to approach the show, so one of the worst mistakes you can make is not demonstrating at least a rudimentary amount of thoughtfulness and knowledge about the show and the characters you are auditioning for. It is disrespectful at best, lazy at worst. Again, you are auditioning not only your voice and your acting skills, you are auditioning to become an integral part of a creative team. To come to the table with nothing to contribute is to be like that one kid you always got stuck with to do group projects–you know, the one who never did any work.

As with any audition, confidence is vital. Taking control and doing your homework will allow you to focus on performing and at least reduce your nervousness. You are selling yourself as much as you are selling your talents. So walk into the room with your head held high and a bright, cheerful disposition. And never apologize! There’s nothing worse than the false or even genuine modesty of someone who immediately says “Sorry” after their audition piece. And have some fun! We sing because we love to. Show them your love and you can’t go wrong.

“There’s a box of Twinkies down at that Mini-Mart” from the film, “Zombieland”. A shy student trying to reach his family in Ohio, a gun-toting tough ...
Adult Female Monologues

PROOF – Catherine gave up her life and schooling to take care of her father until his recent death. 1-2 min. CATHERINE: I lived with him. I ...
Film Scenes for Men

“Have you ever seen a real key lime pie? From the film ” The Shape of Water.” Giles finally makes a stand. Ideal for Adult Males ...
Adult Male Monologues

“I would like to say something, your honor” from the play “The Producers”. Leo defends his producing partner in court. Comedic Monologue for Adult Males. ...