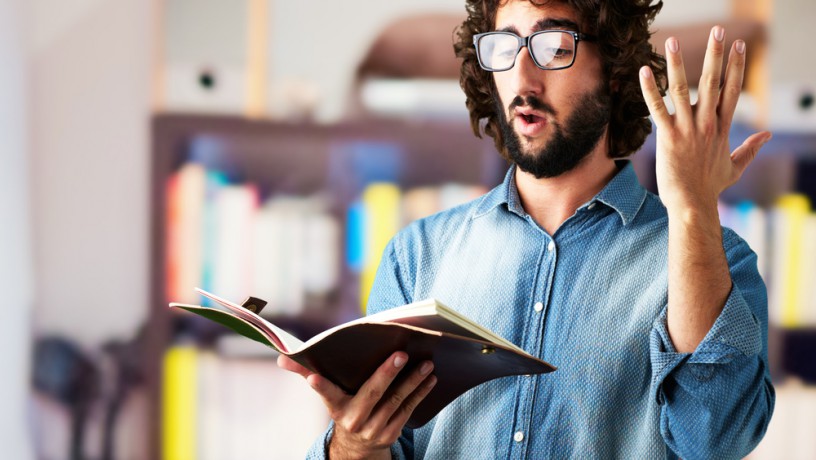 So you’ve been cast in your dream job, and you’ve got an entire script to digest.

First, congrats on breaking all the legs!

But if you’re like most actors, that elation wears off pretty quickly. It’s almost immediately replaced by a feeling of dread at the monster script you are tasked with not only memorizing, but absorbing and making your own.

Well, first of all take a deep breath. Whether you need to memorize something for performance, or for an audition to land that dream role, there are certain methods and thought processes that can make the task more manageable.

Do you know the best way to eat a whale? One bite at a time.

As disgusting as that image might appear in your mind’s eye, the metaphor is apt when it comes to memorization. It’s super easy, especially for imaginative folks like actors, to allow our minds to jump miles ahead of where we actually are. Ever experienced a chain of thoughts like this? “Yay, I got the role! Whoo-hoo! Okay…look at that huge script…Oh god this is going to be tough…I don’t have much time…oh man, there’s no way I can get all that down…oh god I’m never going to make it…I’m going to fail…they’re going to realize they made a huge mistake and that I’M A TERRIBLE ACTOR OH GOD KILL ME NOW!!!”

Once you’ve got your mindset ratcheted down to focusing on bite-sized nuggets, now’s the time to use that active actor’s imagination. If you just look at the words on the page as dry, flat things that you need to somehow cram into your head one after the other, you’re going to have a bad time. Instead of killing yourself over not memorizing quickly enough, slow down a little and let the imagery of the piece wash over you. What are the colors, the smells, what’s the light like in the scene, what are you wearing, who are you talking to, what do they look like to you, as conveyed by the words in the script? Once you’ve got a feel for that, take imagery to the next level: what pictures or sensations or feelings do you associate with the words in a given line? A rudimentary imitation of the famous “memory palace” of Sherlock Holmes fame is to associate words with something separate from the word itself, but distinct and somehow related: if a phrase contains the word “sorrowful,” you might think “blue” as in sad, then in your mind’s eye, picture a blue sky or Van Gogh’s “Starry Night.” This is a great exercise in helping your mental agility via a sort of mental play, one that you can utilize throughout a script.

Too often when confronted with a script to memorize, we immediately put ourselves in a negative mindset, viewing it as a task or a chore. As any kid in school or taking piano lessons will tell you, even 30 minutes of homework or practice time can seem like an eternity, if you’re dreading it. So take the time to wash that negativity away. Relax a little. When you first sit down to start memorizing, don’t memorize. No, really. Read the script as if it were a short story or a novel. Imagine yourself in there, really in that world. Let the flow of the entire piece wash over you, the ups and downs of energy, the shifts in tone and emotion, just as if you were reading a good book. Legend has it that Anthony Hopkins reads a script 100 or more times before even agreeing to do the film or play. Now, we may not all have that kind of time, but there’s something to be said for absorbing the overall piece rather than just beating it into your brain a line at a time by sheer brute force. A healthy combination of both might be optimal.

4. You’re Better Than You Blink

Did you notice the weird word in the header above? That comes from a Malcolm Gladwell pop-science book titled “Blink.” In it he goes a long way toward showing that human mental and emotional processing is much more subtle, and much more subterranean than we think. The title comes from the notion–proven time and again in studies he cites–that even before our conscious mind processes something, we already KNOW about it, whether it be a person, a problem, or a situation. Our minds do some sort of jujitsu that we don’t really understand even before we actually have time to think–in the blink of an eye, in other words. Take this to heart as you memorize: you’re getting more than you think you are, and your mind is better at this than you realize. Again it comes down to mindset: are you are filled with tension and pressure to memorize? Or are you open, engaged, and ready to take in what’s there? Makes a world of difference.

I really liked this idea I got from a director years ago: stop calling it memorizing. When people recite “memorized” things it comes out like kids saying the Pledge of Allegiance. Instead, focus on comprehending. Get the meanings behind the words and phrases, and the words themselves will come as you go along. And if it’s for an audition, having a strong sense of the scene and where your character is coming from and where he or she is going via the words is a million times more important than nailing every vowel and consonant perfectly.

As in all things, the more you memorize, the better you get at it. Memorizing a script gets easier the more times you do it, and the more you do it successfully, the more confidence you’ll have next time around. But you can’t build confidence without a positive outlook, so if you let go of the self-judgment and instead allow the script to flow into you in a more organic way, you will not only absorb the material more fully, you will have more fun doing it!

“I plead down” from the film “Gone Girl.” Tommy tells Nick about his time with Amy and when she accused him of rape. 2-3 min. TOMMY: Fuck ...
Adult Male Monologues

“Mrs. Christian… please, will you sit down a moment?” from the film  ” Eight Millimeter” A private investigator is hired to discover if a “snuff film” ...
Audition Monologues

THE BOOK OF MORMON – Elder Price has finally had it with… well, everything! 1 min. ELDER PRICE: Well, well… If it isn’t the SUPER MORMON.  Spreading ...
Adult Female Monologues